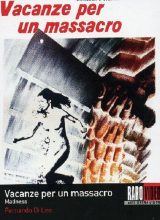 An escaped convict is searching for the loot he buried there following a previous robbery.

The plan was simple: get the money out from under the fireplace, avoid detection by the police, and get out.

He thought the farm was abandoned, but the current owners have just arrived on holiday. The occupants are a man, his wife, and her sister.

The sister is a nymphomaniac who is secretly sleeping with her sibling’s husband.

Fascinated by the unusual dynamics of his victims’ relationships, the maniacal deviant decides to stick around for a while and get a few sick thrills by playing the dysfunctional trio against one another.